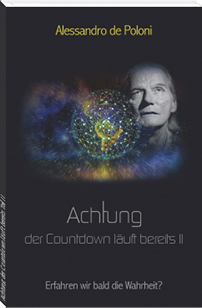 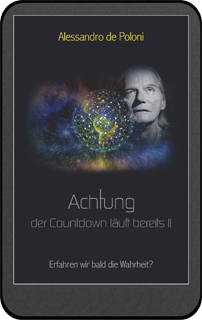 Will we find out the truth soon?

In the second volume of “Attention, the countdown is already running”, Alessandro de Poloni reports on
events that were never made known in the media. He also calls on his readers to question boundaries, thought patterns and habits – to think the unthinkable. Because when reality shows too many contradictions and politicians, scientists and even the church only provide vague explanations for them, then it is time that every single citizen
starts looking for “honest” answers himself. The author recalls that today, as never before, humanity is challenged to “be one”, to awaken with all things and to recognize the relationship to one another as cells of the same origin.
As in tape 1 of “Attention, the countdown is already running”, Alessandro de Poloni leaves it to his readers in this volume to form their own opinion or to read the book content as truth or fiction. The content of this book does not claim to know the whole truth, but nevertheless so much that each individual has the opportunity to form an image for himself or to build on it through his own thoughts. It is important to him that his readers see the book as food for thought and ultimately develop an eye for the whole themselves.

Primordial Creator – God / Gods: Is there a difference?
The true identity of Rabbi Jesus (Jehoshua)

The time machine
Why is the Vatican hiding this invention?

Flight MH17 & amp; Flight MH370
Should Putin have been the aggressor for World War III?

And the church is silent about it

The creative soul and the incarnate human

Germany is a nationwide test field

Chancellor Angela Merkel unhinged § 95 and § 96 of the

Residence Act
Was she one under the law Smuggler?

Trump and Putin – what’s going on?

Order from your bookseller
or directly from

Reviews from the reading jury

Order from your bookseller or directly from